Psoriasis is a disease that affects the skin and the skin's appearance. How the condition presents itself can cause distress for those who suffer from it. Many people are left wondering “Is psoriasis contagious?” as they have concerns about passing it on to loved ones. Even mild psoriasis can cause concern amongst those who suffer from it. the short answer is that psoriasis is not contagious: it is an autoimmune disease where healthy cells are mistaken for a harmful substance.

Generally, skin cells develop and grow deep inside of the skin, coming to the surface once a month. With psoriasis, this process is sped up and the result is a build-up of dead skin cells on the skin’s surface. It often presents itself with red patches of inflamed skin that have a silver/white scaly appearance. It commonly affects the elbows, knees, scalp, and face. However, with other forms of the disease, the whole body can be affected. This leads to people looking for the best treatment for psoriasis. 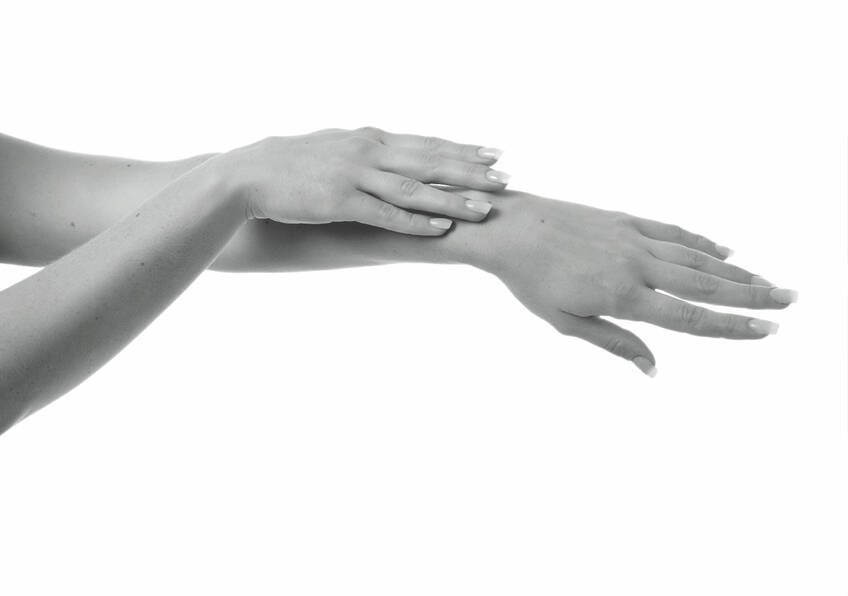 What is the difference between mild and severe psoriasis?

When looking at the best treatment for psoriasis, it is of course important to consider the extent of the condition. Mild psoriasis will have other treatment options that are not suitable for a severe case. In terms of mild psoriasis, this means that less than 3% of the body is affected. Severe cases see more than 10% of the body displaying signs of the disease. Often, whether you will suffer from mild psoriasis or severe is dependant upon the form of the disease that you have:

This is the most common form of psoriasis and accounts for 80%-90% of all cases. Plaque builds up on the skin and displays as the classic white to silver scales that are often associated with the condition. Plaque psoriases commonly affects the face, scalp, elbows, and knees but tends to be mild.

This form of psoriasis displays significantly different when compared to plaque psoriasis. A sufferer will have potentially hundreds of red dots and spots and often will have a rash that appears. This is often mild but can sometimes be severe.

This is a rare form of psoriasis that is severe and can also be life-threatening. It sees those with the condition having the majority of their body covered in a red, peeling, and extremely painful rash. This leaves them prone to infection as well as other health complications.

How to get rid of psoriasis

Those who suffer from the disease are keen to understand how to get rid of psoriasis. Even mild psoriasis can cause discomfort as well as having an impact on levels of confidence and mental health. There is no cure for the disease, however, there is a range of treatment options that can manage it and reduce the severity. Psoriasis tends to go in cycles and there may be times when there are no obvious signs which are then followed by an outbreak. As well as looking at the best treatment for psoriasis, there is also a range of self-help options that may be of benefit:

What is the best treatment for psoriasis?

When considering the best treatment for psoriasis, it is important to consult an expert in dermatology. To the untrained eye, psoriasis and eczema can sometimes be confused and is vital to know that the right condition is being treated. At the Cadogan Clinic, a consultation with a dermatologist will see your condition being assessed and an appropriate treatment plan being devised.

The treatments that are available for psoriasis include:

This treatment covers creams and ointments and are often the first method tried for mild psoriasis. They are applied directly to the affected areas and will often take up to 6 weeks for there to be a noticeable improvement.

These see patients being exposed to both natural and artificial light. It is not the same as using a subbed and only a qualified specialist can carry out this treatment. Ultraviolet B treatment sees a light being used that is invisible to the human eye. It is effective at allowing down skin cell production. Psoralen plus ultraviolet A, sees a tablet being taken that increases the skin's sensitivity to light. UVA rays penetrate deeper into the skin than UVB.

This refers to the use of oral or injected medications. These can be classed as non-biological and biological. The first involves taking tablets or capsules whilst the second involves the use of injections.

What is the best cream to treat psoriasis?

These act to moisturise the skin and can reduce itchiness and scaling. Often these are used as a base before another cream is applied.

Topical corticosteroids can be used on most parts of the body. They work by reducing inflammation as well as slowing down the production of skin cells.

These are often used in combination with steroid creams. They are effective in cases of mild psoriasis and slow the production of skin cells whilst also reducing inflammation.

These can assist by reducing inflammation and also reduce the activity of the immune system.

Often combined with phototherapy, coal tar is a traditional treatment for psoriasis. It helps with the appearance of scales as well as reducing itchiness and inflammation.

Having been used for over 50 years as a form of treatment for psoriasis, it works by suppressing the production of skin cells. It is now often used in combination with phototherapy.

What is the best scalp psoriasis treatment?

Scalp psoriasis is a form of plaque psoriasis that affects the scalp, hairline, behind the ears, and the forehead. It can often give the appearance of flakes of dandruff. When considering what is the best scalp psoriasis treatment, there are over the counter shampoos that may have some effect. When these do not work, consulting with a dermatologist could see you being prescribed any of the following:

The important factor with these treatments is to ensure that they are actually applied to the scalp and not to the hair. A consultation with an expert will see a treatment plan being drawn up as well as advice on how to effectively apply any treatments.